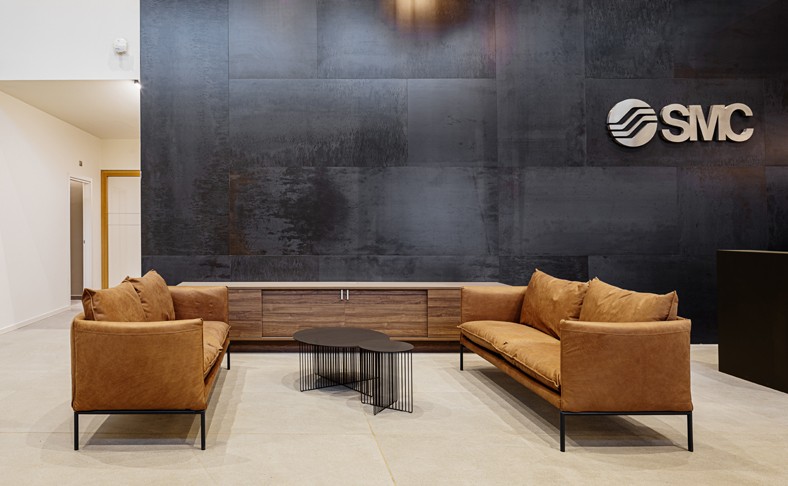 The project for the new SMC Italia headquarters was overseen by the e45 studio which defined the site, the sizing and the vertical development, planning the spaces and interior design of the 5,000 square meter three-storey building. intended for offices.
The elaboration of the concept is inspired by the welcome and minimalism typical of the Japanese culture of which the SMC parent company originates.
The blue color of the Company is taken up and declined in the flooring, combining it with the cold tones of the materials such as exposed concrete and the ceramic coverings of Cotto D'Este. The presence of wood as the finishing of the glass walls, the Gentry di Moroso upholstered sofas in the entrance hall and the plants balance the environment making it warm and comfortable.
A large central courtyard, covered by a wooden paneling alternating with large glass walls, distributes natural light through a large skylight to the meeting rooms overlooking the void where two plants that reach a height of 8-10m together with islands for the conversation they furnish the space.
For the meeting areas, Herman Miller and Arper chairs were chosen with Pedrali tables while the operative area is set up with Herman Miller chairs and Sedus tables. Finally, for the kitchenette area the chairs, tables and stools bear the signature of Pedrali.